Gloo Edge has a very flexible architecture and can be deployed in many ways on various infrastructure stacks. We recommend using Kubernetes, if that is your platform of choice, because it simplifies operations. Kubernetes, however, is not the only way to deploy Gloo Edge. You can deploy and manage Gloo Edge on any infrastructure (think VMs, or other container orchestrators) with out of the box support for Consul as the configuration backend.

You may be asking yourself, what options make sense for which problems? In this document we will be looking at the following deployment architectures for Gloo Edge:

Gloo Edge can play the role of a very simple Kubernetes Ingress Controller. See the docs for setting up Gloo Edge as an Ingress controller. In this mode, you get a simple HTTP proxy based on Envoy Proxy (restricted by the Kubernetes Ingress API) that can interpret the Ingress sepc. Note; a large portion of the Envoy (and Gloo Edge) functionality is not exposed through the Ingress API. Consider using gateway mode for non-trivial deployments. 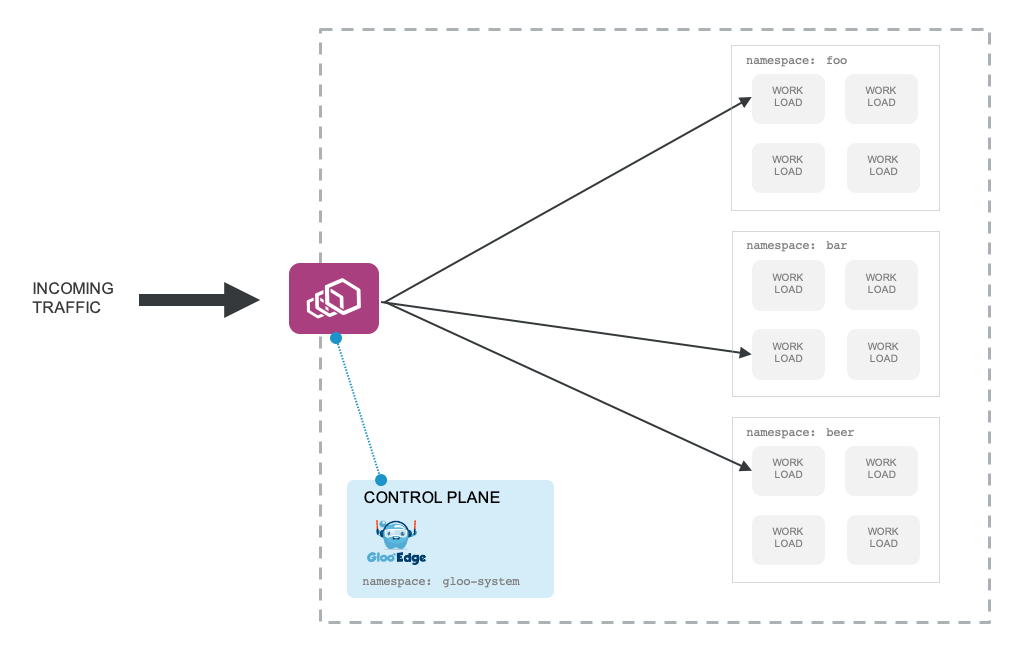 In this deployment model, the only component from the Gloo Edge control plane that’s required is the gloo deployment. Take a look at the Gloo Edge Ingress Installation docs for more.

Since the Kubernetes Ingress API is very limited and restricted to HTTP traffic, we recommend avoiding it for anything but very trivial hello-world usecases. For any non-trivial cluster, you’ll want to use the Gloo Edge gateway functionality. In this model, the proxy is deployed as a full-featured API gateway with functionality like traffic routing, header matching, rate limiting, security features (WAF, Oauth, etc) and others. Having these features close to the applications is desirable, therefore you run the Gateway within the cluster as the edge ingress proxy (note, this is ingress with a lowercase “i” and not necessarily the Kubernetes Ingress resource.) 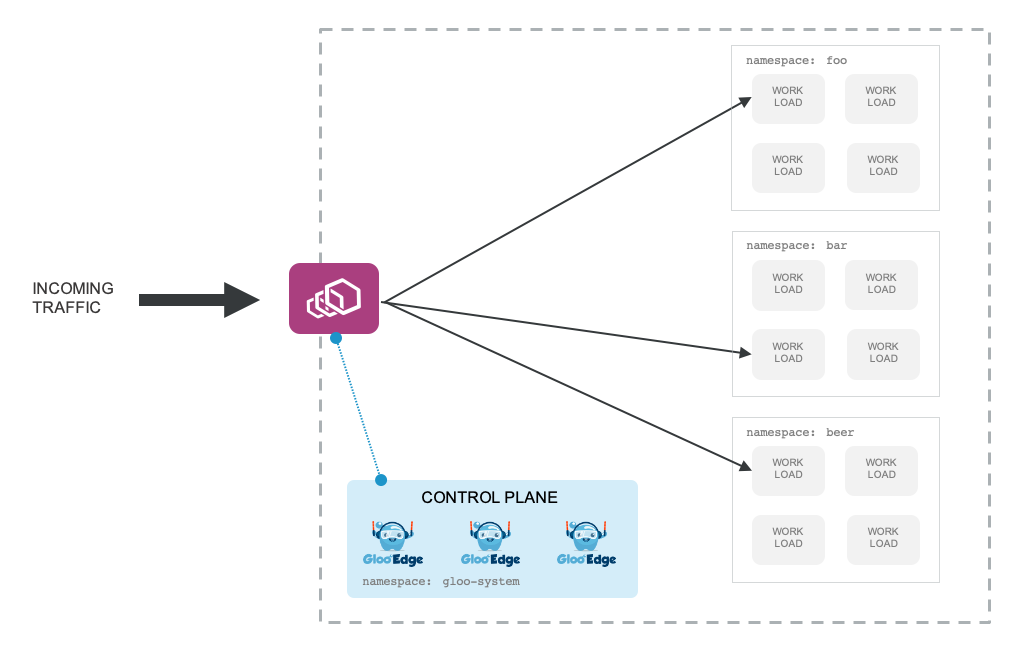 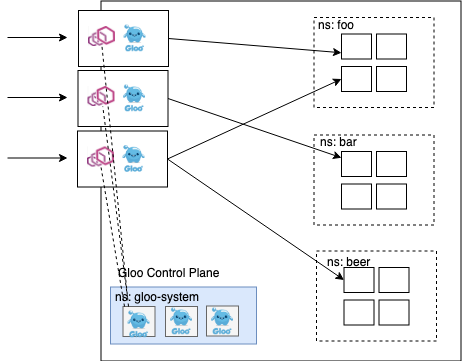 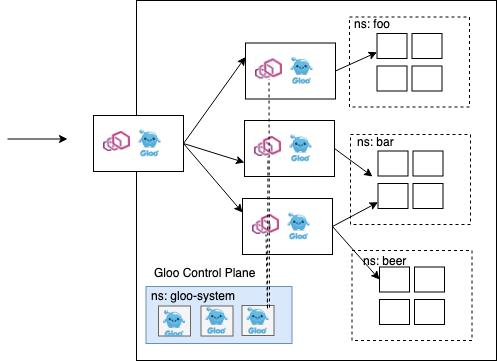 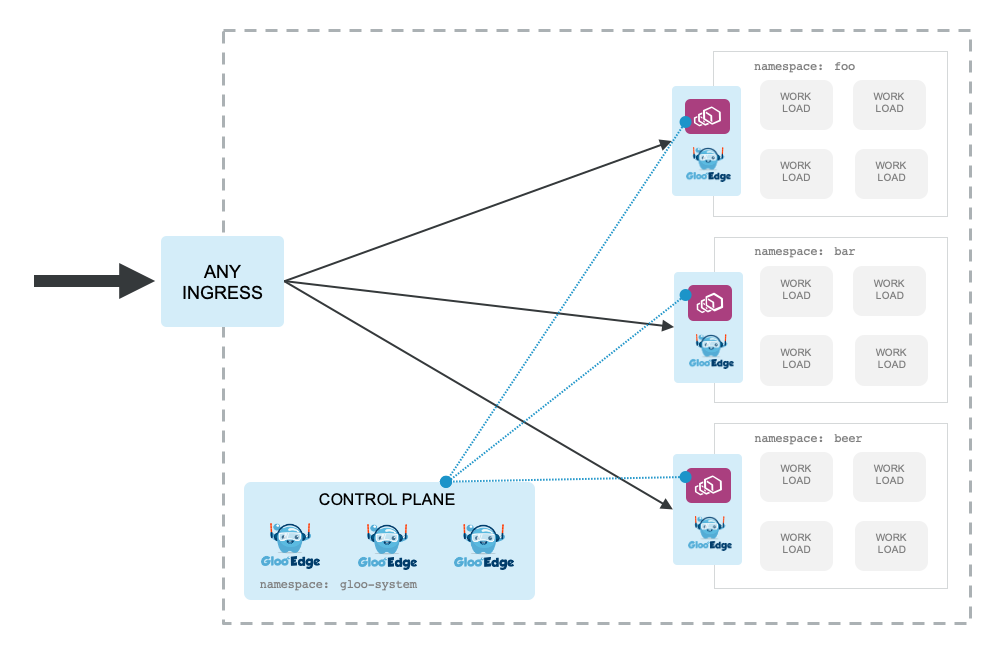 In this model, the proxy sits close to its boundary of services and shares a single control plane with the rest of the cluster. Each group of services is self-managed by that group and enforces the idea of decentralizing these operations. This helps scale out the ability to make changes independently and the Gloo Edge API specifically supports this (though API delegation).

API Gateway for a service mesh

A service mesh uses proxies (including Envoy) to build a network of L7 connectivity where it solves for issues like application-network observability, security, and resilience. These proxies are typically used to solve these challenges in a so-called “east-west” traffic manner. Just like we’ve seen in the previous deployment pattern, however, we know we will want to provide strict boundaries around our microservices and be very opinionated (and decoupled from implementation) about how it gets exposed to the outside world. This includes ingress and egress from the service mesh. An API Gateway built on Envoy, like Gloo Edge, can be deployed very complementary to a service mesh and solve these API challenges. Many times, a Gateway built on Envoy Proxy can be a stepping stone to get to service mesh. 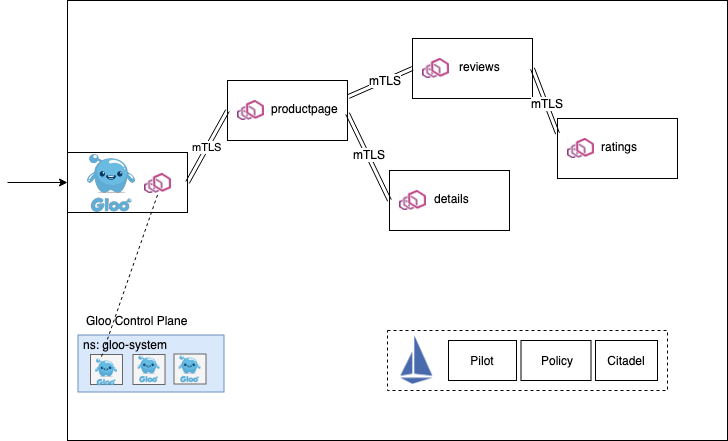 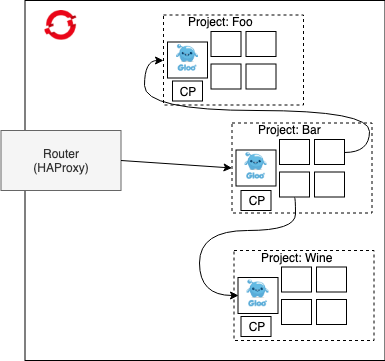 OpenShift comes out of the box with a Router component which is the main ingress point to the cluster. This Router is based on HAProxy and basically acts as a L4 reverse proxy and connection load balancer. It can do TLS termination and collect basic metrics. For a basic deployment of Gloo Edge, we can add it behind the OpenShift Router. 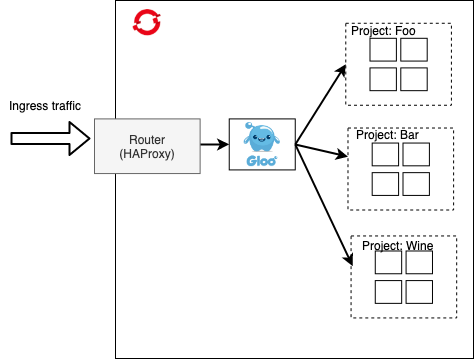 Alternatively to running behind the OpenShift Router, we could run Gloo Edge on infrastructure nodes as NodePort. This has the advantage of directly exposing the API Gateway and eliminating the HAProxy hop, but has the drawback that network folks don’t typically like NodePort. You could also use something like BGP routing or metallb to expose Gloo Edge through a LoadBalancer directly. 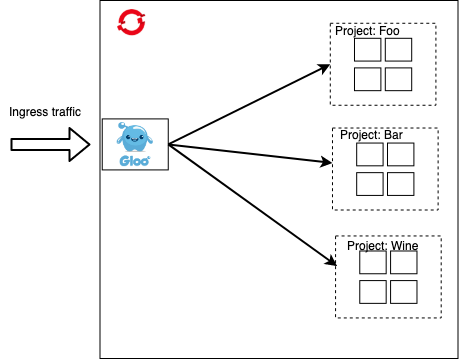 At this point this gives us basic API Gateway functionality with minimal fuss, however we want to explore ways to decentralize this deployment. At the moment, it’s still fairly centralized and shared, although much less so from a process perspective because we can use GitOps and other declarative, SCM-driven approaches to self-service the configuration of Gloo Edge at this point. Gloo Edge’s configuration is declarative and defined as CRDs in Kubernetes/OpenShift. If we need further isolation, we can also use proxy sharding which Gloo Edge supports and assign certain APIs to their own gateways. This involves a slight management overhead, but allows you to separate failure domains for higher-value APIs. 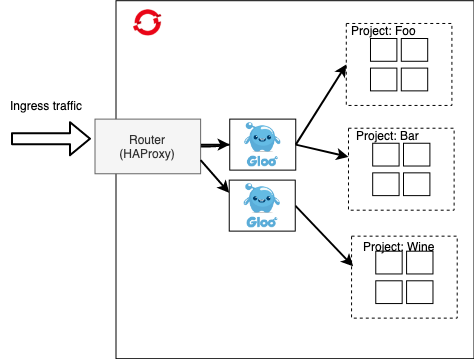 The previous deployment patterns can be extended out to multiple clusters. You may have multiple clusters divided by team, or service boundary, or some other construct. You may wish to abstract how your services get exposed to other parts of the organization by using an API Gateway. Gloo Edge can play very well in this deployment. Each cluster would have its own deployment of the Gloo Edge control plane with various proxies (see above) playing a role of ingress, sharded ingress, or even bounded context-API. 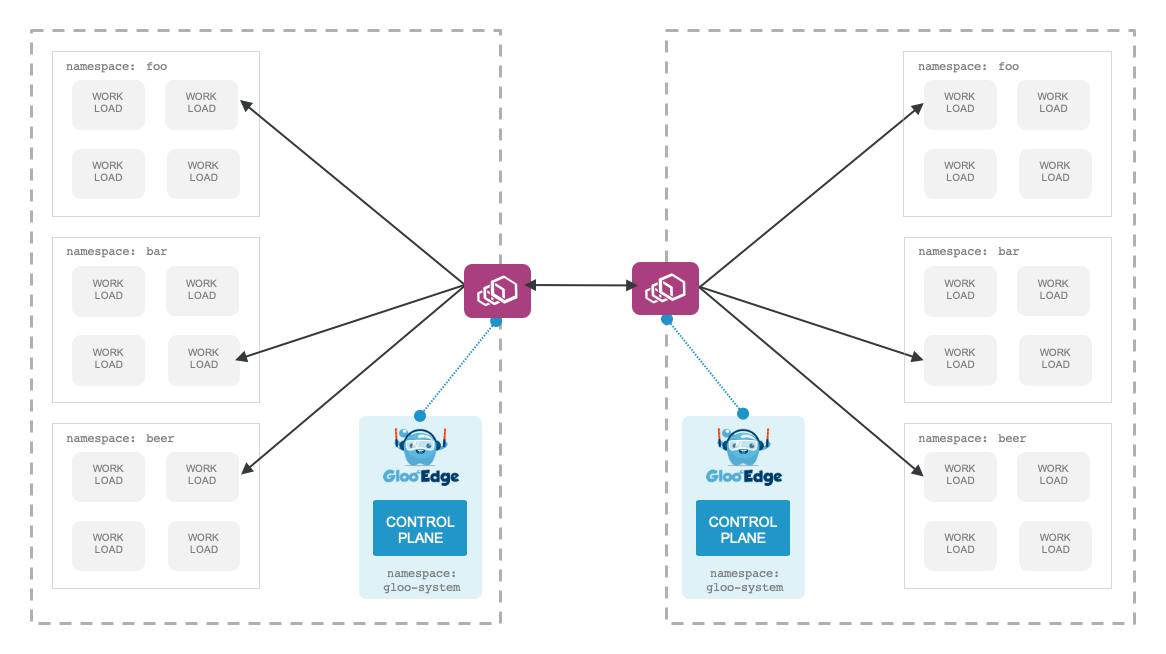 Now that you have an understanding of the Gloo Edge deployment patterns, there are number of potential next steps that we’d like to recommend.